On Tuesday 25 November 2015 Brook held a fundraising event to celebrate our 50th birthday with members, supporters and volunteers to look back on the history of Brook. The event was held at Thomson Reuters in London. 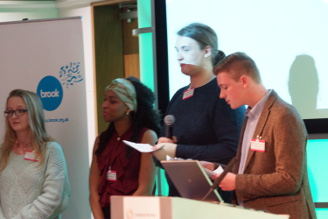 Simon Blake OBE, Chief Executive, introduced the event, noting the date of Brook’s first official session for unmarried people looking for contraception and sexual health advice was unknown, but as Lady Helen Brook, our founder, stated in  an archive interview, Brook was born on a “grey November evening” – meaning that our birthday celebration was taking place more or less exactly 50 years later.

Simon talked about  what has changed since 1964, and what hasn’t. He mentioned that abortion is no longer illegal, as it was until the 1967 Abortion Act, and attitudes to LGBT people have been transformed – just two examples of welcome progress. But the fight to ensure that all young people are able to enjoy their sexuality without harm is far from over. For example although there are areas doing fantastic work for young people, every young person does not receive the information they tell us they need about sex and relationships.

Even in the areas where progress has been made, we still have further to go: abortion is still not legal in all parts of the UK; sexual, homophobic and transphobic bullying continues to take place in our schools; HIV infection rates among young men who have sex with men are  unacceptably high; and we continue to uncover more and more about the extent of child abuse and sexual exploitation. When it comes to helping young people with relationships and sexual health, there is still much to do.

Brook’s  young volunteers gave a fantastic presentation about their highlights from Brook’s history, their favourite areas of Brook’s work today they have been involved in, and challenged the audience to a (fairly tough!) quiz, including asking the audience to name all 15 types of contraception. They showed a video from the Good sex project, and talked about the importance of listening to young people.

The volunteers all spoke about how getting involved with Brook had changed their lives, sharing anecdotes about their experiences and how this led to personal growth. One young woman said that getting involved with Brook was the first time she had ever felt truly listened to, and that she was an important part of the decision making process. A young man said that other sexual health services he had accessed in the past had made assumptions about him based on his sexuality and his ethnicity, but that “Brook is different” – he had never felt judged by our staff, and trusted us all the more as a result.

Jules Hillier, Deputy CEO, closed the evening by reading out part of a moving testimony from one of our young volunteers:

Brook has helped me to grow as a person. They have enabled me to conquer my fears, boost my confidence and literally saved my life. Without the help of Brook and the amazing work they do I don't think I would be here today. Before coming to Brook I was in a very negative place suffering from bouts of depression and was ultimately vulnerable to the outside world… Without the encouragement from Brook and the support I received I would never have dreamed of achieving so much and helping to follow in Brook’s footsteps and help those young people out there who need it just as I did. Without Brook I don't know where I would be.

Thanks to all who attended the evening and supported Brook, as well as those who weren’t able to be there but have supported Brook from its founding and along the way. Thanks as well to all who supported us via social media - read our  #happybirthdaybrook Storify or watch the short film below.